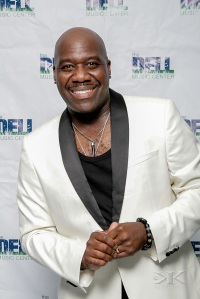 Will Downing • Soulful balladeer with many credits to his name.
(c) kdmorris photography

I recall during a few concerts I was covering, either for the artist, venue, media or just because I was there, when a few photographers would look over at me and ask: “Hey, what are you shooting with?”

Depending on the era, my answer grew from the following: ‘Canon T50…Canon AE1 Program…Canon A2e…Canon 30D…Canon 70D…Canon 5D MK II…’ over the years, my bodies changed as well as my lenses.

My early answers and their facial expressions made me feel as if I didn’t belong there, to the point where they felt the need to pull out pocket albums or (later) display their digital images and ask to compare mines to theirs. Well, some of those cats got their feelings hurt because I was blessed with “an eye” as it’s called in the photography world.

Because I had proof of life that ranked among theirs, I pretty much took their condescending attitudes and flipped it into respect, be it genuine or feigned – they stopped asking me “…What are you shooting with?” and started asking me: “Let me see some of your work…” and “are you shooting this or that event?”

Understand that there are gear hounds and photographers whose lack of confidence and talent is masked by big “gear” when humility is just one click away.

Don’t be intimidated by what another photographer has in his/her hands, just think of it as someone with a drivers license, but can’t drive on the freeway, sticking to the side streets and calling them “short cuts.” They have the knowledge but lack the ability.

10 thoughts on “Your Gear vs The World: Don’t Give Into To Gear”